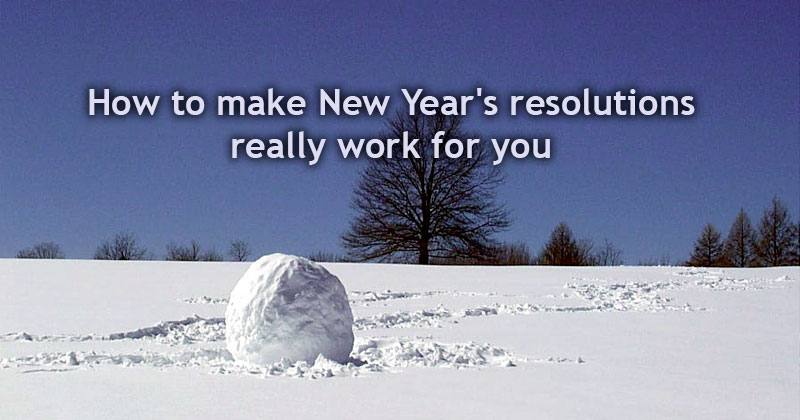 Have you seen the many uplifting pictures floating around the Internet at the end of the year about New Year’s resolutions? And have you noticed just a few days after the New Year, it all dulls down and we all forget about the new plans, the “new me,” the new habits we’ve been swearing by in the last days before the New Year? Why does it seem so easy to think of New Year’s resolutions and so tough to implement?

In this article I’m going to show you why New Year’s resolutions usually don’t work, and how to develop better habits anyway.

The snowball effect starts with a tiny snowflake. A small, insignificant thought we think, word we say, action we take. According to how things in our environment work, this very first thought however, isn’t insignificant at all. Because once we’ve thought it, the potential to think it again or to think a similar thought is higher than it was before we thought it.

In the self-help industry, it’s said it’s the Law of Attraction that’s doing this – that’s bringing to us more similar thoughts based on this initial thought. It makes sense, doesn’t it? That everything builds up to something bigger, and that there is a force that makes all this happen.

So what happens with New Year’s resolutions is, we’ve attached these beliefs around the New Year that we are hoping will be enough to counteract our snowball of unwanted habits, already rolling down the hill.

But you see, the snowball started a while ago. And we’ve been adding to it because instead of checking in with our thoughts, we left them “unattended” so to speak. And the Law of Attraction or the force of habit or the snowball effect or momentum (whatever you want to call it) has been naturally doing its thing, building up to something bigger and bigger.

Once we do something out of habit, our snowball is well down the hill and a belief we think of for just a few days before the New Year can’t cancel its effects.

A habit starts with a thought that turns into a belief that turns into a perspective from which we then see ourselves, the people around us, our world. And let’s face it: we don’t really think about New Year’s resolutions all year round, we just think of them right before the New Year. Meanwhile we’ve been building on this unwanted habit – whatever it is – all year round.